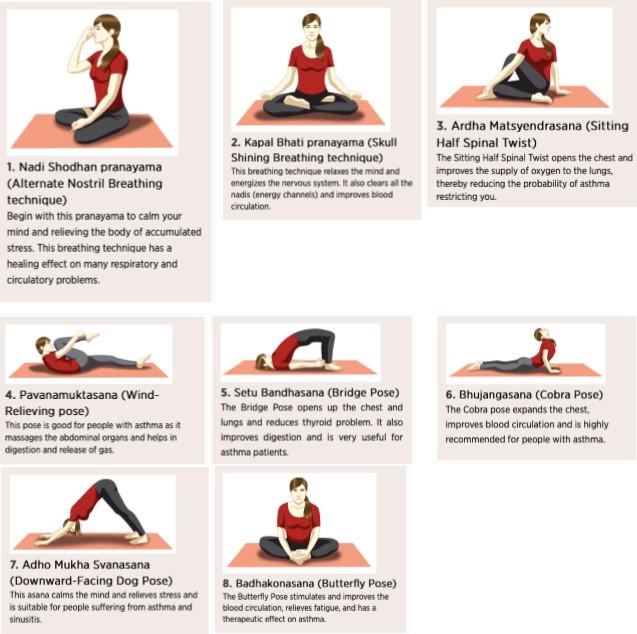 Asthma, pronounced Azma, is a lung disease associated with difficulty in breathing. This is because of inflammation and constriction of the airways to lungs, which makes it difficult to breath. The onset of this condition is usually, sudden and the sufferer generally is left gasping for breath. That is why onset of Asthmatic symptoms is called an Attack.

The symptoms of this condition are wheezing, constriction of the chest, shallow breathing and coughing. Coughing may be accompanied by expulsion of phlegm (thick, stringy mucous).

Asthma can be caused by:

Anyone can get asthma and since this disease is long-term or chronic in nature, it has to be managed carefully. Thankfully, there is effective medication available however as we know, long-term medication has its own problems.

Yoga breathing exercises can be practised as a supplemental therapy. Regular practice can help reduce the frequency of attacks. This should be the aim.

How do breathing exercises help?

Firstly, lets consider how a person breathes. The diaphragm sits below the lungs. When it moves down, expanding the lungs, drawing air into the lungs, this is known as inhaling. When it moves up the lungs contract and the air is expelled out, known as exhaling.

Studies have shown a decreasing trend in physical exercise has resulted in under-utilisation of the lungs. An average human is using the upper parts of the lungs and the lower part of lungs and the muscles associated with are growing weaker. This can be devastating in the case of an asthmatic, as the lungs need to work harder during an attack. A brisk walk every day as well as regular breathing exercises can help reduce attacks in athmatics.